skip to main | skip to sidebar

Book Review Once upon a Prince


Wait, What? He said WHAT???? After twelve years, Tours as a Marine, High school, and THIS?
You were so sure that He was going to propose, but instead he breaks up with me! The last thing you  need right now is a boyfriend, But When a Prince walks up and helps you change  a tire, well that resolve heads out the window. When he asks you to design a garden, as YOU like, well it’s all you have ever dreamed of. You have fallen head over heels in love with him, but when the royal court disagrees with how “American” you are. Throw in a Jealous heiress, Well let’s just say you’re in for a bumpy, but Exciting roller coaster ride.
Join Susanne Truitt who is taking you through all the perils and princes that are truly the things of modern day Fairy tales.  A tale that has been spun, twisted, and all together fun loved!
I absolutely loved this book, I loved the twists and turns, the Many Laughs, and the occasional cry. Overall a very good read And I positively couldn’t put it down.

Posted by The Blond Homeschooler at 9:09 PM No comments:

So shines the night book review


What’s happening you think to yourself, all you’ve ever known has been ripped from you, again. First your father now your husband, the only job that has required you intelligence, and now you chance at teaching, all gone. So you’re running far from everything far from the Sorcerers that have held captive the girl you are now running with, far from Rhodes far away, when you grabbed the strangers hand as he held out before you a new journey you had no Idea how new it would be, but could anyone have seen how many troubles still faced? Becoming a tutor was perhaps the best and worst choice of your life, a story unfolds with a battle that’s unseen, and two people with powers unlike anything you had ever seen, faced against the choice between the gods, or the Christians one true God, what will your choice be?

Set in 57 A.D. the story follows Daria a female tutor in the throes of wickedness and betrayal can she survive or better yet will she truly be living if she does?

Narrated by the Apostle John, and reliving Paul’s ride in Ephesus come along for this rollercoaster of a ride and find out where true power lies.

Posted by The Blond Homeschooler at 4:49 PM No comments:


Imagine if you were Ruth, going with Naomi to Nazareth, except you’re not Ruth and you’re not going to Nazareth, you are going to Florida with your Stepmom trying to get away from your dad and soon to be fourth stepmom. Needing a change of scenery, Natalia’s world is coming down hard, and fast around here. But when she meets a Charming Pastors son Brian she realizes she might not need to write of all love as a catastrophe. When finding her place in all of God’s love seems like an impossible feet, she might not be able to do it on your own, you’re going to need help to find your place in it all.
I thought that this book was a great book on Kristi’s part. I loved all the powerful messages in the chapters, and the fact that the book is no to preachy but yet shares the message of Faith in such a way that makes me Smile. I LOVED this book and had such a great time reading, I cannot wait to see what else Kristi Mcgee has in store. Remember God has you Right where you belong.
I was given this book to review honestly by Booksneeze
Abby

Posted by The Blond Homeschooler at 9:43 PM No comments:

Kara Mccormick Wants to be a star! Based on the story of Isaac and Rebecca, Kara goes into a house filled with girls all trying to be a costar in news channel for teens, the costar a secret.  But when her dad takes a turn for the worse she must choose between her dream and being with her dad.  Kara along with her friend Addy, find out what the most important things in life are and have a bunch of fun doing so, And about  that secret star well with parents who are very protective things get a little complicated but no one feels the need to compromise there beliefs and guidelines.
Everything you could want in a book The sequel to “ First Date”  Kristi Mcgee out did herself. Filled with Action, Acting, romance, and most importantly Faith. I personally Loved this book and didn’t want it to end.  But when it did end I couldn’t have been happier with it. I definitely would recommend this book to everyone including but not limited to younger and older teens and kids. Definitely a Five star book.
I have received this book to review honestly by Booksneeze .com
Happy Reading Abby

Posted by The Blond Homeschooler at 11:18 AM No comments:

I have for many years loved going to the Farmers market to buy seasonal fresh produce, but normally by the time I find a recipe to use the produce its spoiled or my family has eaten it. But now I have a way to put all that great food to a good cause (hence MY stomach), Through this book I have found many ways to use those extra green beans, or that leftover corn that NOBODY wants to touch.

I found many recipes that can be made ahead and a lot that won't last long. I found Tips Tricks and the occasional mouth watering I want to spend my life's savings and go buy four hundred pounds of ham cravings. On top of it all There are fun stories and many pictures ( Which doesn't help me when it's three in the after noon), When it's all said and done, This was a Majorly good decision and I cannot be happier that I received this book. I just hope that you love it just as much as I have.

P.S. I received this book by Book sneeze, to review truthfully.

Posted by The Blond Homeschooler at 9:42 PM No comments: 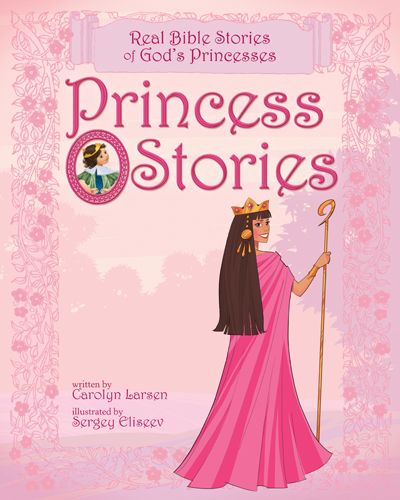 Carolyn Larsen delights young readers with her exceptionally fun, cute, and entertaining book, Princess Stories. Along with beautiful illustrations from Sergey Eliseev, this book is a winner for any little princess in your life!  A"Mirror, Mirror, on the wall" poem before each story makes each tale perfect for bedtime, or anytime you want to add a little fun to storytime! It contains the stories of many of the "princesses" in the Bible. True heroines of faith. A perfect addition to any little lady's library.

Overall, this book was great. I gave it to my six year old sister who is literally in love with it. No joke. She wrote her name in the front and brought it to school, and she loves hearing the stories. She like the beautiful dresses the princesses are wearing, and I believe we will buy an extra copy to give to her best friend for her birthday. I would definitely recommend this  book to anyone with a young sister {or daughter :) } whom you love very much. This book is a perfect gift for princesses of ages 4-8. Enjoy!

This book was given to me by Tyndale for free for this review
Posted by The Blond Homeschooler at 4:11 PM No comments:

So if sharing your faith wasn't hard enough, try doing it on a reality TV show called “The book of love". Addy is just trying to get off the show, so she can go to her house in Florida, when she finds herself falling “in love” with the President’s Son, Jonathan Jackson.  If that’s not bad enough, her CO-stars aren’t too happy with her, and neither is the producer. She thinks that since everyone is out to get her, she won’t make through one elimination, let alone get to the top five! Addy tries to get the producer to like her, but nothing is working. When she finds out that he hates Christian’s, she isn’t too happy about it, but decides to show him the love of Jesus, and be nice to him. When she learns about an attempt at the President’s life, it doesn’t get much better, and when the president’s son finds out that Addy’s Uncle Saved his dad, he goes to the producer, and try’s to honor the Uncle.  The producer selfishly thinks of what he would like, and in the End is mad about EVERYTHING!
I thought this book was AWESOME! It had the great points of an Esther story, but threw in Lights, Camera’s, and a super cute guy. Shy and naive Addy, is trying to find out why God has placed her in this position, which leads to Revelations, and Romance. Overall an Amazing book, by an Amazing Author, and I look forward to more from her.
~Abby
P.S. I received this book to review honestly, by Book Sneeze

Posted by The Blond Homeschooler at 8:41 PM No comments:

The Blond Homeschooler
Hi, This Blog is all Book Reviews and are purely my opinion, Happy Blogging!

Contributions for my Blog Header,Signature, and button go to my wonderful sister Libbi H. from the Funner Life!